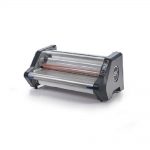 We get calls all the time from schools asking us which laminator they should buy. They might see something advertised on Amazon or eBay and think that getting a machine for under $600 is the way to go. We understand that everyone tries to work within a budget. After all, it isn’t worth buying something more than what you need. But when it comes to the best laminator for a school or small office, the GBC Ultima 65 EZ Load Laminator is the gold standard.

When considering a purchase like this, you should always consider the quality of the machine you will get. The GBC Ultima 65 has been around for many, many years and is still one of the best values on the market. It can laminate 1.5 mil or 3 mil film on a 1″ core, and can do 12″ – 27″ wide film – all standard widths for schools. The most recent generation of this machine also features the “EZ Load” system which makes it virtually impossible to make a mistake when loading new rolls of film onto the machine. While this requires the purchase of special EZ Load film which is slightly more expensive than traditional rolls, it does eliminate the headache of wrapping the film around the rollers, causing the need for expensive repairs. The Ultima 65 allows you to choose between using the more economical film and the convenient EZ Load film. It comes with features such as variable speed, easy pivot feed tray, stop buttons in the front and back of the machine, rear slitter, alignment guides to easily guide your project in straight, a built-in footage counter so that you know when you are getting close to the end of the rolls, and auto shut-off for safety purposes.  Also, if you are using traditional film, the new autogrip shafts make it much easier to load the film.

There is no doubt that investing in a laminator will help you protect documents and make it easier to clean and disinfect frequently handled items. Make sure that you give strong consideration to a GBC Ultima 65 EZ Load laminator from Ambind Corporation. It is the gold standard!